It has been identified that there has been a potential security risk that has lead to the development of a change to the way that agents currently login. At the moment, “Agent ID” is the same as the “Agent Passcode” which has lead to agents accidentally miss-keying their login and passcode and finding themselves logged in as a colleague and not understanding how. It is also not always easy to identify and requires escalating to our Application Support Team followed by a back-end search and fix.

In order to remove the risk, confusion and inconvenience of this we have taken the decision to change the login method for agent dialer login which will be carried out in two stages. Phase 1 - all new agents will have a unique Agent ID  and a different passcode which has the security algorithm match the two before allowing access to the system.

ContactNow, Agent-On-Demand, Softphone and desk phone logins will all be affected by this change. All users that use the dialer will be faced with this change including all, Agents, Admins and Supervisors.

The new more secure system will provide all users with separate and unique Passcode. When an agent chooses their login method they will then be taken to the Agent Page that will show them their agent id and their new passcode. Agents will then follow the login instructs presented. eg 1234#98765# 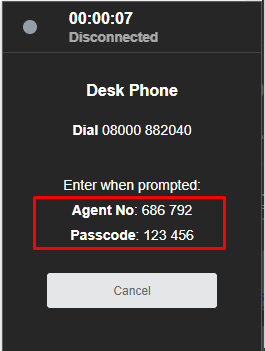 When agents are prompted to login they will now be required to view their new passcode and agent ID  and the following steps define the process to achieve this:

This will prevent unauthorised agent logins when connecting to the phone system.