DNS Testing tests the networks DNS against the 8x8 GTM (8x8 DNS) to verify devices are geo-routing to the correct data center. This testing is particularly useful with troubleshooting “Line Unregistered” for SRTP enabled lines, and call quality issues.

To identify geo-routing issues look through the DNS test results and locate the following message:

Conflicting DNS resolutions: Two or more DNS Servers are in disagreement over

As an example this user has a routing issue to the Polycom SBC as well as the Secure SBC (Extensions with SRTP enabled): The locations local DNS identified as: "[Local DNS Server 1]" is routing to the West coast, and the GTM (8x8's DNS) is routing to the East coast. This user happened to be located on the East coast. Using this information, we can see the user is geo-routing incorrectly using their DNS to the West coast server. To resolve this the user will need to change their DNS in use on the network.

Additional information on DNS and Geo-Routing

The ping test sends ping requests to each data center to check for high latency and/or packet loss over the connection. This test will not determine where the issue is coming from, only that a potential issue is present.

Use WinMTR to get more detailed information on latency, packet loss and a potential cause for high latency and/or packet loss issues if the problem is consistent. If the issue is not consistent use Ping Plotter for an extended test with time stamps. These tests will help determine where an issue is coming from if one is present.

The test below shows that ping requests within the United States, Canada, United Kingdom, and Hong Kong were fine but a warning message was provided for Australia. Only results from your geographic area should be considered, example you are in Ohio thus Only US East and US West coast data centers should be considered. The NAT test only determines the NAT type. This does not indicate any issues with the network as each firewall and router handle NAT differently.

Full cone NAT (also known as one to one NAT) is the only type of NAT where the port is permanently open and allow inbound connections from any external host. A full cone NAT maps a public IP address and port to a LAN IP and port. Any external host can send data to the LAN IP through the mapped NAT IP and port. This type of NAT is also known as port forwarding. This is the least restrictive type of NAT as the only requirement is the connection comes in on a specific port - the one opened by the endpoint.

A restricted cone NAT works in the fashion as full cone NAT, but adds additional restriction based on an IP address. The internal client must have first sent packets to an external host before it can receive packets from the external host. In terms of restrictions, the only requirement is that the packets come in on the mapped port and from an IP the internal client has sent packets to.

Symmetric NAT applies restrictions in the same way as a port restricted cone NAT, but handles NAT translation differently. Symmetric NAT has its own unique issues. These issues stem from generating randomly generated ports and applying them to the client when reaching out to destinations. This NAT type does not use port preservation.

Below is an example of a test where ports are blocked: In contrast, below is an example of a test where all ports are available: Provides information about the computer that is running the test. This is especially useful for users running only Virtual Office Desktop. We can determine if the tested machine is meeting the minimum system requirements or is in an unsupported environment.

It is recommended to identify any potential VPN connections on the system information test. Additionally, we want to make sure the test is run on the same network as the phones.

ALG testing determines if ALG is enabled on the LAN. If ALG is enabled it can cause a multitude of issues such as dropped calls, echo, call termination, one-way audio, and no audio. If the test fails you will see the following message: In contrast, here is an example of an ALG test with no errors: Additional Information on the ALG test

The media testing makes a series of mock calls to each data center. From this information, we can determine if there will be potential issues on calls due to packet loss, latency, or jitter. If the results are showing a warning or failure, the user will have call quality issues. Keep in mind this data is only relevant to the closest data center to the tested location, as well as the backup.

If the user is located in Canada, and the test provides a warning or failure to Australia, we would not take that as a valid fail. An example is provided below: 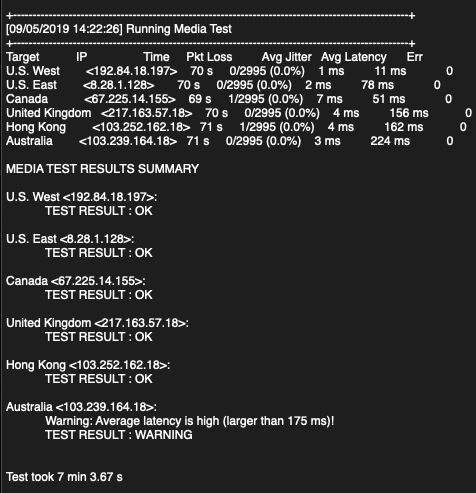 Fragmentation is a technique that divides a data packet into smaller data packets so that they can be sent through a network that can only transfer small data packets. Fragmentation occurs during network transmission. When these packets are received at their destination, they are reassembled to their original data packet size.

In rare situations, signaling packets may become extremely large and require to be fragmented. If fragmentation is not supported there will be a loss of audio. 8x8 recommends that Fragmentation be supported by all network equipment, including routers.

Below is an example of a Fragmentation test with a warning message: This test runs a traceroute to the nearest data center to the tested location based on geo-routing information. If there is a consistent issue along the path to the data center you will be able to determine where it’s coming from on the traceroute.

This test is also useful for identifying the route the connection is taking from the local network to the path out to the public internet. If there is a second local IP, it is suggested to attempt to log into the device and verify it is in bridge or pass through mode. If it is not this could cause issues due to double NAT. Below is an example of a potential double NAT: Bufferbloat is the undesirable latency that comes from a router or other network equipment buffering too much data. Below is an example of a network with bufferbloat:

An example of a network without bufferbloat: